The Reading Abbey Stone is the largest piece of intricate carved stone to be found on the site of the ancient Benedictine abbey at Reading. It was uncovered in 1835, where it had been carefully buried on an east-west orientation, in front of where the high altar would have stood. This is the same area where the founder of the Abbey, King Henry I, is known to have been buried.

The book examines the documents recounting its discovery and the various theories about its origins and use. The most common opinion is that the Stone is a capital from a column cluster. This view was challenged even at the time of its discovery and it is a problem that still divides opinion.

The book tells how I called upon expert analysis to identify its structure and how it relates to other stones found in the Abbey grounds, or believed to have come from the Abbey.

Many questions remain unanswered such as whether it belongs to a previous building, why was it buried in such a particular way and by whom and when.

The Stone was converted into a baptismal font for the church of St James when this was opened in 1840. St James' is the first church designed by AWN Pugin and one of his letters, where he discusses the inscriptions on the font, is reproduced in the book.

The book tells an intriguing story and includes the sources so that readers can form their own opinions from the evidence. The Stone, now font, can be seen at St James' in the Forbury, Reading. The church is usually open during the day and I am more than happy to be contacted, discuss the evidence and when possible meet up at the church and give talks.

I will be adding this to the paypal site but in the meantime if you would like a copy please send me an email and I will arange with you to send a copy. 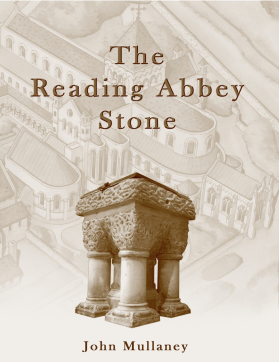