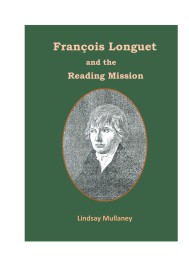 It concerns a priest, François Longuet, who fled the persecution of the Catholic Church in France during the French Revolution and who established, under the jurisdiction of the London District, the first Catholic mission, since the Reformation, in the area in Reading. The book looks at the historical background and tells the story through the remaining correspondence, much of which is in the Westminster archives. It tells of his murder and the reaction of the local community. It also gives an insight into the life-style of these early priests.
Longuet was known to have had extremely good relations with the Protestant clergy of Reading and he was involved in raising money with them for the Reading Dispensary, the forerunner of the Royal Berkshire Hospital.
It is therefore not just the story of the return of Catholicism but about how an immigrant community, fleeing persecution, came to become an integral part of English society in one town at the beginning of the 19th century.
The book was officially launched in mid February, the 200th anniversay of Longuet's death. If you wish to order a copy please contact us through the website address as we have not set up Paypal for this book. The book may also be purchased via Amazon. This comes to us anyway. .
REPRINT
The first print has been succesful and we have only a few copies left. We are considering a reprint so it may be that we will see what response we get. If we run out we may ask you to be patient whilst we make an estimate of numbers. In that case we will ask if you are prepared to wait until we have decided to reprint the book and hold you order over. This would be most helpful as it is always tricky to work out how many copies to reprint.
A PERSONAL MESSAGE FROM LINDSAY
I would like to thank all those who have bought a copy of this book. It is a record not just of the life of an interesting and influential man in the history of Reading and especially of Catholicism in Reading, but it is an important historical document in its own right as it brings together information and material from many disparate sources which it would be difficult for future historians to reduplicate.
Thank you for all your support,
Lindsay